Ever since I moved to the US in 1996, I’ve been reading one Romanian daily newspaper or another, with titles changing as their web presence waxed and waned and as my own preferences shifted over time.

As it happens, a significant part of my livelihood has come lately from helping some eighty-odd American daily newspapers stay in business. I use survival analysis to improve subscriber retention rates and revenue yields. The author of the idea is Matt Lindsay of Mather Economics in Atlanta. I helped re-factor his Stata code so it would keep up with a growing variety of analysis needs, and did a few other things. The system works. We get a cut of the revenue improvement that we can reasonably claim credit for. I set up a way to measure that by using a randomized test/control group methodology borrowed from clinical trials. Our clients are generally a satisfied bunch – as long as this way of gauging effectiveness is good enough for the FDA, it’s good enough for them too.

So I was wondering for a while now if our services might be of use in Romania as well. The fine people of the Romanian Circulation Audit Bureau keep a great online database. I nosed through it a bit, and it looks like the papers back home are in serious trouble: 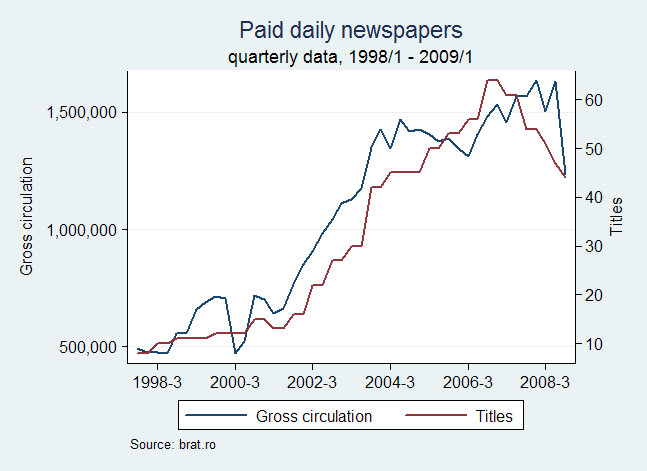 Basically, based on data up through the last quarter of last year, there was a silver lining: though the number of titles was falling steadily from its 2006 peak, at least for those left standing circulation held up alright. That bit of good news was wiped out in the first quarter of 2009: both circulation and titles dived to 2003-2004 levels. Romanian newspaper owners should talk to Matt.