This is another low-and-slow recipe for the Akorn, closer to barbecuing than to smoking. 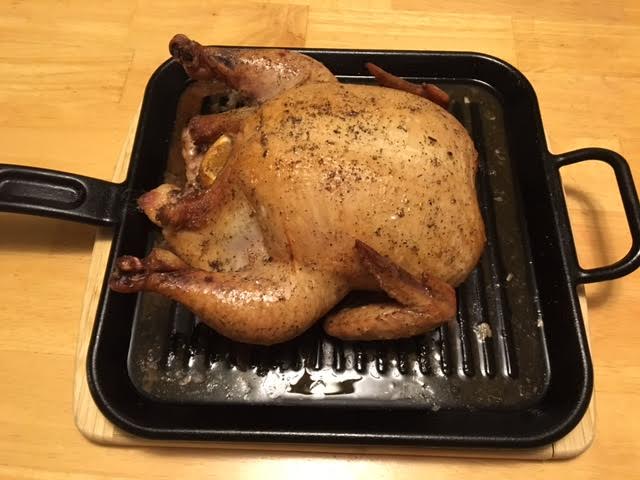 While the grill goes up to temperature, get the bird out of the fridge, drain the juice, pat it dry, and brush it all over with the house dressing. This is what makes this a Durham chicken: I have no idea where else you can get this particular dressing, that’s all.

Put the bird on the Akorn, close the lid, and check back with it after two and a half hours. Check sooner if you overshot and made the grill run hotter. Akorns can get the temperature up and hold it there very well; getting it back down is hard, by design. But the beauty of indirect heat barbecuing is that you have broad leeway in trading heat for time. However hot you run your grill, the chicken is done when the juices run clear. That’s my standard. Yours may well be the scientific one – namely, that the internal temperature in the thickest part of the thigh not touching bone should be 165° Fahrenheit (75° Celsius). Go with what works for you.

Putting the bird on a cast iron grill pan as shown is optional. I’ve done it both with and without it. These grill pans are easier to clean than the Akorn’s grill grate.